I’ve been writing too many poems about the garden. I started with the bougainvillea that refuses to bloom, before moving on to skunks and raccoons insistent upon digging tunnels under the fence at night in order to hunt for grubs, the carnage that comes about due to survival of the fittest, and, more recently, a red coral tree that has made a spectacular comeback after nearly being killed off by last winter’s cold spell.

Sometimes I worry my work isn’t “heavy” enough. The garden does feel like a luxury in the face of the terrible problems taxing our world. Yet when I have a breather, and I find myself staring at plants, words often begin to crest. That’s when I head for the computer. 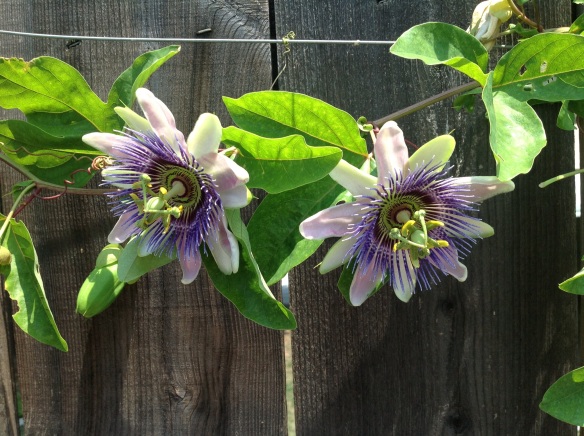 I started yearning for a garden shortly after moving to San Diego. I would take long walks in my neighborhood, only to find myself ogling people’s yards. Not only does this climate sustain a truly interesting selection of flora (it’s easy to see where Dr. Seuss found inspiration for his quirky plants), it is possible to set up a garden so that something is blooming at any given time of the year. That’s an exciting prospect for someone used to a more traditional winter.

In the end, I have the Water Conservation Garden at Cuyamaca College to thank for the fact that my own yard now supports a xeriscape garden in lieu of lawn. Cuyamaca’s garden is a teaching garden, one that encourages the use of drought tolerant plants and innovative landscape design. Students and non-students alike spend hours within its fences, taking notes on various plants, not to mention low-water gardening techniques. Indeed, the fellow who initially put in my garden is a graduate of Cuyamaca’s Ornamental Horticulture program.

My landscape designer gave me a beautiful start—then he gave me the reins. I quickly became worried that I would not have the ability, time, or inclination to keep up my garden. Lawns are a no brainer, but nudging plants to grow into pleasing shapes and color schemes takes some doing. To be sure, some of my favorite plants died early—some did not fulfill their promise. I have struggled over finding good replacements. I’m not sure I’m putting them in properly. Pruning confounds me (I generally feel like a butcher). I can handle the weeds, but I don’t like the pests. In the end, I often think about what I have not yet done with the yard. I know I could go further. I have friends who would have by now.

But really, do I have to keep up with the Joneses? We’re talking about a garden here. Secretly, I like its in-progress state. It will probably never be manicured to perfection. It generally displays a measure of unkemptness, which I tend to ignore until I can no longer stand it (sort of like my hair). I do occasionally meditate on benches, hanging art, chimes, statuary, and other accents I might add. I’m sure I’ll get to it someday.

My garden has come with some surprises. It does require less water than a lawn. And setting all of those aforementioned insecurities aside, it really hasn’t been difficult to maintain. I generally roll up my sleeves every four to six weeks to weed and prune. I particularly like to tinker outside after a stressful week at work, as I am reminded that not all creatures are on the clock—time can stretch in a different direction.

Most weekends, however, I sit in the garden cradling a cup of coffee as I stare at hummers particularly drawn to the Mexican sage. The Mexican sage sure is a trouper. I’ve decided that when all else fails, put in some Mexican sage. It’s been in bloom for months.