I once overheard one of my colleagues talking about the pros and cons of working in academia. She pretty much implied that while she knew she would always bring home “the medium bucks,” her teaching job was a deeply satisfying labor of love. Of course, good college positions often come with regular academic breaks—an altogether different sort of compensation.

For me this arrangement has meant living in two places. While I occasionally feel too divided between two lives, I enjoy the sense of renewal that comes from returning to a beloved refuge every six months or so.

When the semester ends, I’m eager to head out of San Diego County and drive to the Oregon Coast so that I can pick up where I left off with my small space and my extended family. I do occasionally wonder about how much more traveling I might have done if I didn’t live in two areas—yet I’ve found it sustaining to invest most of my free time in one vacation location. 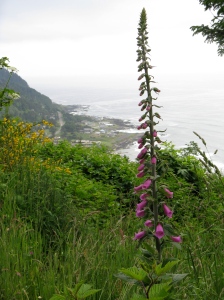 I have owned my cabin here longer than any other home—and longer than any other life I’ve lived in any other place. As the seasons have passed, so have the tales. I’ve watched mudslides close roads, serious logs pile up on the beach (only to be carried away again), a lighthouse covered over for repairs, and a family of tenacious eagles dive for fish at the mouth of the river. Yes, regular storms invariably work with nature’s muse to deliver plenty of stories for the telling when there’s nothing better to do. I did happen to be holed up here the weekend the bow of the New Carissa made its visit to Waldport (Seattle was my other home then).

When I do finally roll in, turn on the water and electricity, and open the windows, previous years press through my screens. Some things we still talk about have vanished—homes, stores, and restaurants. People have left. People have died. New people have moved in. We don’t have a gas station this summer (we used to have two). And technology sets down its wires slowly. Some people want it, but not as much as folks in the city—and not as often. There’s enough technology. 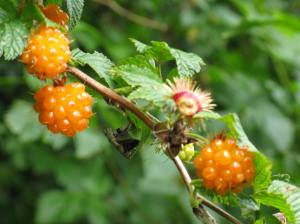 There’s also time to pick a bucket of blueberries at the u-pick place. For the ambitious baker, other berries abound: marionberries and raspberries. There’s time to buy a whole tuna right off the dock. People like to get together and talk. Whales hover near the shore during the summer. Rumor has it this pod never makes it all the way to Alaska. They’re happy to stop right here and feed till it is time to head south. I feel a kinship with this pod.

It can be challenging to maintain a dwelling from a distance, particularly during the winter. Winds once blew one of my trees into a neighbor’s yard, my pipes broke during a deep freeze, someone insisted there was a bear on my property, and another called to fret over my roof repair job, which she felt was in danger of being blown clear off. But then, my neighbors here have gotten to me faster than any of my urban neighbors ever have. I’ve never felt better looked after by my neighbors. 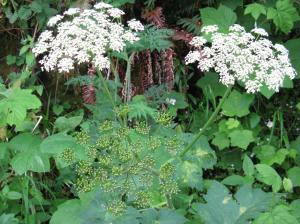 more water, purple foxglove, Queen Anne’s lace, yarrow, salal, salmonberries, salmon, and a moon that peeks over the hill to watch the sun sink into the horizon. The other is born of dryness, lizards, whales (the same ones), cactus, ocotillo, yucca, palm trees, snakes, coyotes, and fire. Pasts seated in both Washington and Northern California occasionally surface. I’ve got a whole coastline to ponder (perhaps a few mountain ranges, too), which is more than I really wanted—but life has moved me where it wanted. So this is what I have to write about.