Years ago book critic Michael Upchurch told me how it was virtually impossible to keep up with all of the noteworthy books being published, because, as he put it, “we are living through a renaissance.” I immediately wondered which titles would still be around some five hundred years from now, when our renaissance is being taught to undergraduates.

Creative America does appear to be alive and well. The myriad workshops available to writers, actors, musicians, not to mention various blends of these categories, is noticeably lush. I recently took a workshop with Ann Randolph involving both writing and improvisation (in an earlier post I mistakenly called it a performance poetry workshop).

Ann Randolph is a self-starter who has produced, performed in, and written her own one-woman shows. I was privileged to see her multifaceted production of Loveland at Rhythmix Cultural Works in Alameda, California, the night before our workshop began. Her portrayal of Frannie Potts—who is trying to come to terms with the life and death of her mother—is funny, painful, bold, and skillfully executed. By the way, Randolph also plays Frannie’s mother, as well as the other characters in Frannie’s life, and quite a cast it is. She flips between these characters with remarkable speed and somehow manages to be “in character,” no matter which character it is.

While Randolph exudes the sort of talent that could make the aspiring writer and/or performer want to curl into fetal position, she checks it at the door and moves into an unassuming stance before she guides other artists. She’s actually gotten into the habit of teaching a writing workshop to audience members right after her 90-minute show, which must feel like a marathon.

During our two-day Write Your Life workshop, which was offered through 27 Powers (www.27powers.org), I zipped through all of the writing exercises without batting an eye. The improvisation activities were another matter. Not only did some negative feelings surface around the use of role-playing in the workplace (former staff development workshops), a much younger artist immediately began to kick and scream. I pretty much bowled my way though each exercise with resistance set on high. By the end of the first day I had “been there done that.” If I hadn’t been participating with a friend, I might have passed on day two.

But that’s when everything gelled.

Voice Break describes how I began singing in my twenties, only to hit a wall. During those days I also studied acting and dance. While I did receive the most encouraging feedback on my singing, I had some vague dream about how I might do it all. In the end, I threw in the towel on the performing arts world altogether and began to fulfill my true dream, which was to become a writer (like so many other people in this literary renaissance). I dismissed those performing arts classes as a phase, as therapy, as the sort of activity I needed to delve into in order to find myself.

During the workshop, I turned out pieces centered on how I’d written these explorations off. My subject matter was clearly driven by the improvisation exercises, which I was not expecting to face. I found myself writing about all of those feelings of failure that once arose in me when I didn’t hit the mark. I wrote about the awkward instrument I used to work with, the frozen body that wouldn’t move the way I wanted, wouldn’t allow my true voice to come through.

Micro-movements are the building blocks of character—the little nuances, the fears we express in nervous laughter. They are hard to discover when you can’t find your body, when you shoulders are up in your ears and you can’t feel your breath, when you feel pressured to be clever, look funny, and come up with that brilliant flick of the hand in time with the killer line you have just made up.

I’d thought I’d come to terms with this period, especially as I watched my confidence as a writer slowly begin to grow. In those early years of my writing life, I’d been particularly taken by Natalie Goldberg’s discussion of the monkey mind, the critical inner monologue that runs as the artist tries to work. I finally had an effective way of defining this creature and nailing her down. I learned how to get out of my own way and write.

Yet as I stood before a fellow player on the stage—as I stood before the rest of the retreatants in the workshop trying to be good—it was clear a different monkey had never completely left me. There she was chattering away, reminding me of how I’d blown it.

This surprised me. Like I noted, I’d written off my involvement in the performing arts as a learning experience, which remains a fair assessment. So I hadn’t expected this material to be so fierce. I hadn’t expected the feelings to be so immediate. As a writer, I rarely beat up on myself anymore. I just try to see what works and what doesn’t. Yet as a performer, I was quick to dive right back into the sort of habitual thinking that can only sabotage one’s work.

In the end, I was forced to consider how I’d ignored the aspiration that once motivated me to try to perform in the first place. As the pile of pieces centered on this era of my life grew, I found myself facing what I had so firmly squelched—the fact that my desire to perform had been real, not just a therapy exercise.

Yet if we are currently living through a literary renaissance, we are truly experiencing a performing arts renaissance. It’s daunting to get up on the stage in the midst of all of that talent. Besides, I expect I only want to make peace with singing-acting-dancing monkey. While I do sing in a choir these days, writing is surely enough creative activity for one voice.

Van Gogh’s Ear has just published “Earth Day,” a poem originally featured in The Ballad of the New Carissa and Other Poems.

Sometimes your life waits for you somewhere without your knowledge. Like my former boyfriend, David Kirchner, who still happens to be a friend. We met in the Anza Borrego Desert. 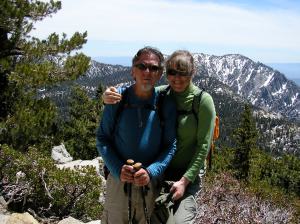 Eventually we discovered that we’d attended the same elementary school in Davis, California. Actually, I attended Valley Oak Elementary School, and he went to East Davis Elementary School. We quickly ascertained, however, it was the very same school. By the time I was three, his family had moved to La Jolla (I was still facing the big oak tree in the kindergarten playground). Still, I wondered if his parents had ever run into my parents during the early sixties.

As my life turned out to be firmly rooted in the Pacific Northwest before I came of age, I had no intention of ever leaving. Yet twelve and half years ago I found myself heading south to work with the late Zen teacher Charlotte Joko Beck. I didn’t know anyone else in San Diego, but once I arrived, I ended up encountering a bunch of characters that were vaguely recognizable.

Take Mai Lon Gittelsohn. She also could have walked past my parents—though in the Bay Area during the fifties. Her husband Mark did meet my father back then, in one of the UC Berkeley libraries. In fact, he remembers half the staff my father eventually worked with in the UC Davis library (my father left them around 1975). The thing is I met Mai Lon in Forest Grove, Oregon. We both signed up for the low-residency MFA program at Pacific University. Low-residency means students can live wherever they want and show up in Oregon twice a year for ten days. Which is what we did. Then we’d fly home to San Diego. 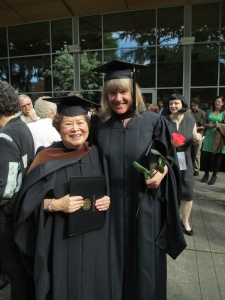 Mai Lon is old enough to be my mother. She does have a daughter exactly my age. She and her husband, Mark, used to socialize with one of the people who helped to hire me as a community college librarian in the San Diego area some twelve and a half years ago. His name is Larry Sherwood. I guess he and his wife, Virginia, and Mark and Mai Lon used to hang out together before I met any of them. My friend Patricia Santana remembers Mark from her UCSD days. She was employeed as a student worker in the library, where he worked as a librarian (she also helped to hire me, though I’d never met her before the interview). Virginia Sherwood worked in the UCSD Library. David’s mother—Florence—once worked for UCSD, though not in the library. For that matter, so did Joko Beck.

At 79 Mai Lon was the oldest student in my graduating class at Pacific University (class of 2012). She’s just turned 80, and she’s hoping to publish a book of poetry about her Chinese American family. We recently figured out that her grandfather was living in Red Bluff around the same time my great-grandmother was living in Redding. For the record, my great-grandmother ended up in the Sierra Nevada foothills, and Mai Lon’s family ended up in Oakland. And I ended up in the Pacific Northwest and Mai Lon ended up in Del Mar.

This weekend Mai Lon and I will be heading off to Alameda to take a performance poetry workshop with Ann Randolph. I expect we will have plenty to share.